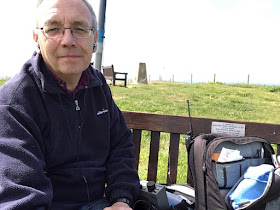 Today was 2018 ”Bumps on the Air” day for me. Because we don’t have any summits in Norfolk I have to make do with tiny hills, or bumps!

Two years ago Jim G3YLA and I climbed up Beeston Bump (63m) and did some amateur radio operating. This year I wanted to beat that so drove to Norfolk’s mightiest peak – Beacon Hill near West Runton at 103m. Ta dah!

Actually, this wasn’t a very exciting spot as there are just two rotting benches, a flag pole and trees all around.

Nevertheless, I set up my end fed half wave vertical on a 10m fishing pole and connected up my Yaesu FT817. There wasn’t too much about but I worked John F5VKU (also G8MM) near Cannes with 5W SSB. He said he was struggling to hear me.

After playing with SSB for a bit and failing to break some pile ups I connected up my 20m QCX radio and tried some CW. I was really surprised as Karl IV3RJH came back to me, 559/549 both ways. I was running about 2W, he was running 3W.

But the QCX is an amazing radio for the money and hey, I built it myself, complete with the case and custom label, so any QSO makes me smile.

Another 20m SSB session with the FT817 and I bagged Jack OH3GZ and Juha OH6QAZ.

At this point I packed away and after lunch headed for Beeston Bump on the coast near Sheringham. I’ve written about this before as it has a fantastic view over the North Sea. 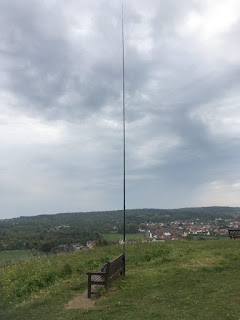 Anyway, I put up the EFHW vertical for 20m and set to with 5W CW from my Elecraft K1. This raised Gert OH/DL7UG and Dima RW4C. I then bagged Fabi IK5IiS near Florence.

Also heard were stations in Cypus and Canada, but the Cyprus station on SSB couldn’t hear me and the Canadian seemed to be sending his life story in CW to another station and I got fed up waiting to call him!

I also had a play with my 3W MTR3, but didn’t work anyone as I could see rain clouds coming and decided to pack up.

So not a bad day’s radio. The Elecraft K1 and Yaesu FT-817 worked flawlessly. I think I was getting some RF into the keyer on the QCX as I had trouble sending “/P” – the “/” turned into a right mess sometimes, although I had no trouble sending it on the K1 with the same Palm Paddle.

The moral is that life is NOT too short for QRP! 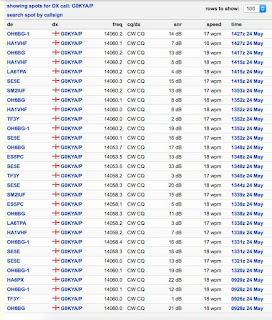 Update: I checked the reverse beacon network last might and saw that I had been picked up across Europe while calling CQ, but often with no response. Some of these SNR figures are quite large too. In other words I was loud enough.

That's a shame as it would have been nice to have worked some more stations.

Is this because of a lack of activity? Or is it because, as I often wonder, that a lot of people have moved to FT8?
Steve Nichols at 11:35
Share